Since April 2017 a poplar tree (Populus x candensis 'Robusta') standing at the Wageningen Campus near the café The Spot in Orion, is being monitored. Information from the tree is gathered using two plant sensors, one sap flow sensor (developed at the Laboratory of Plant Ecology) and one dendrometer (Natkon). A soil moisture sensor is used to monitor the water status of the soil. Meteorological data is available through a temperature and relative humidity sensor inside a ventilated radiation screen in close vicinity of the tree. 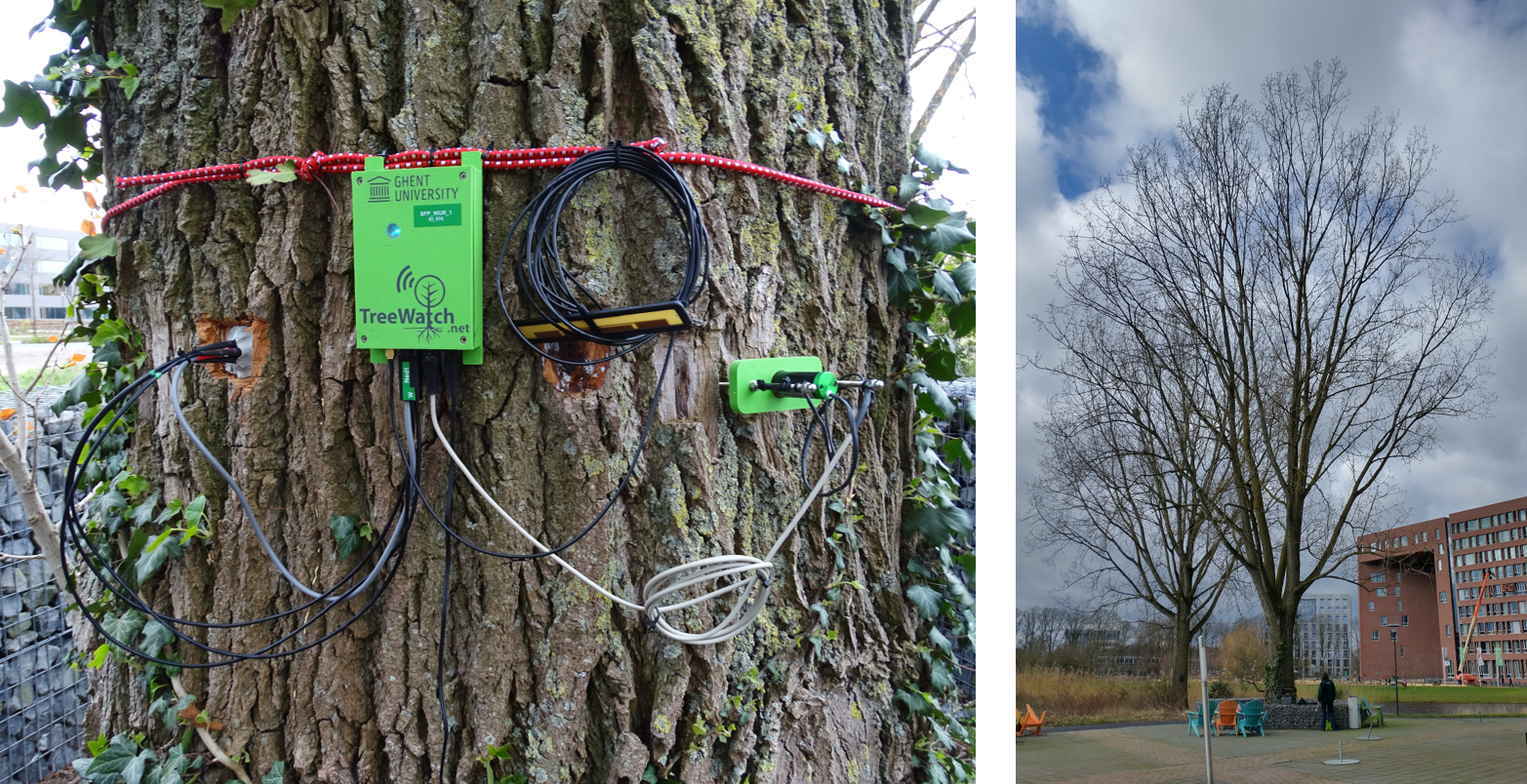 Some basics - Poplars are fast growing light demanding trees – so called pioneers. They prefer neutral to alkaline, nutrient rich soils with a good water availability. High water tables are no problem. Poplars can easily reach height of 35-40 m and a diameter of over 100cm within 50 years! Young trees have greyish-green smooth bark with characteristic diamond-shaped lenticel pattern, but when ageing the bark becomes rough and dark with pronounced ridges. Poplars are dioecious (unisexual) meaning that trees are either female or male.

Poplar Clones – Geneticists have been busy with creating productive and resistant poplar clones. Our twittering poplar is a Canada poplar, a natural hybride between our native Populus nigra and the N-American Populus deltoides. ‘Robusta’ is a male clone originating from France (ca. 1885). It is a very (sea)wind resistant clone and widely planted in the Dutch landscape. The twittering tree is slightly older than 30 years and reached a height of 27 meters and a diameter at breast height of 96 cm. It has a mean diameter growth of more than 3 cm/year.

The satellite image below shows the exact location of the monitored tree. The Wageningen campus is situated in the Gelderse Vallei at the foot of the Veluwe massif (a lateral moraine), where poor pre-glacial sands meet the rich clay and peat soils of the river valley, and where the groundwater table is high due to the continuous stream of water seeping out of the Veluwe massif. At the time that our twittering tree was established the area was part of the experimental fields of the Institute for Horticultural Plant Breeding (IVT). From 2000 onwards the Wageningen campus established at these former IVT fields: buildings and greenhouses were pulled down, but our twittering tree (plus its neighbouring poplar tree) survived. In 2013 the Orion building was constructed next to the poplars and our twittering tree lost its ‘free space’. It got enclosed by stone walls and pavement.

The dynamic chart below displays sap flow and diameter variation measurements in real time. Using the 'zoom' buttons it is possible to select a different time range. A specific time range can also be defined. Furthermore data ranges can be selected by simple clicking and dragging your cursor along the chart horizontally.

The chart below displays air temperature, air relative humidity and soil moisture logged in the vicinity of the tree. Using the 'zoom' buttons it is possible to select a different time range. A specific time range can also be defined. Furthermore data ranges can be selected by simple clicking and dragging your cursor along the chart horizontally.