Climate change causes amongst others more intense precipitation, more frequent droughts and increased summer heat stress in the Netherlands. This threatens the quality of life in urban areas such as the neighbourhood ‘Stadioneiland’ in Amsterdam. The public water organization, Waternet, and the City of Amsterdam, Gemeente Amsterdam, collaborate with stakeholders to make the city ‘rainproof’ and ‘heat resistant’. As urban trees are an excellent tool for local climate adaptation, the question arises how much water they use and how they influence the urban hydrological cycle. By monitoring street trees, the Laboratory for Plant Ecology provides the data and ecophysiological knowledge to investigate these questions.

Water plays a major role in the physiology of plants. Trees extract soil water which is eventually transpired. The transpiration process dissipates heat and cools the surrounding air, leading to thermally more comfortable spaces and a reduction in the urban heat island effect. Moreover, by providing shade, the interior temperatures in buildings are maintained at a cooler level. Thus the need for air conditioning during summer is smaller, reducing energy use levels.

This was also observed in the neighbourhood ‘Stadioneiland’ with thermal images captured at noon on 25 July 2019, the hottest day recorded since the start of measurements by the Royal Dutch Meteorological Institute (KNMI). The temperature difference on a brick wall in the sunlight and in the shade of an urban tree was 16.4 °C. The most striking temperature difference of 23.7 °C was measured on a roof with black tiles in the sunlight versus the same roof in the shade of a tree. These results illustrate the importance of urban trees for climate adaptation. 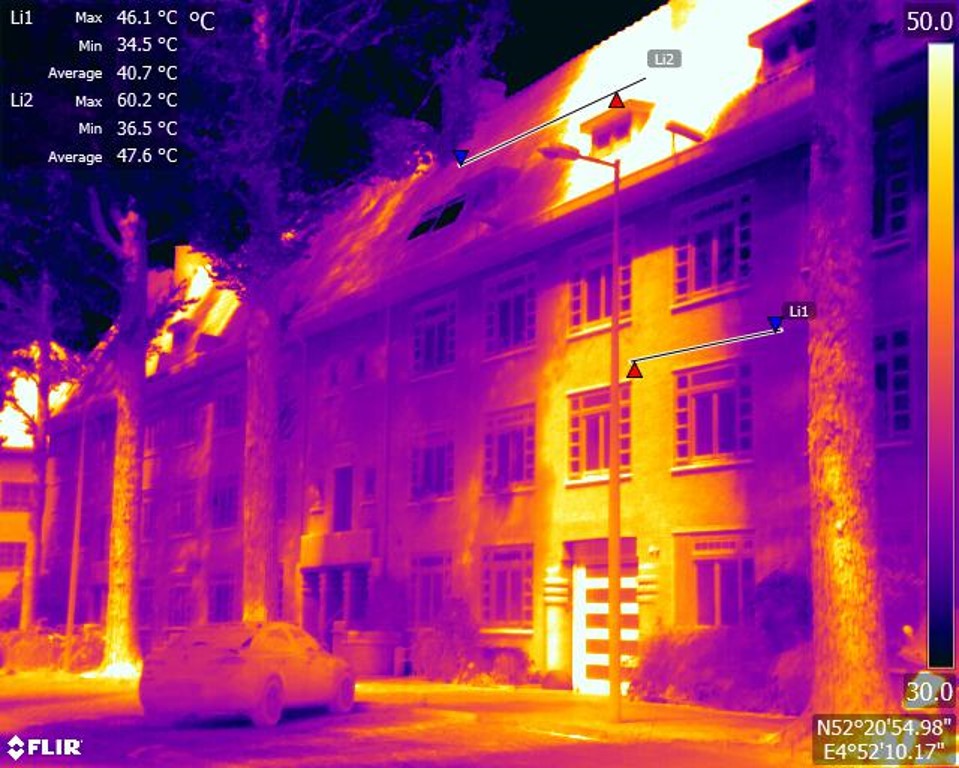 During the extremely warm summer of 2018, leaves of street trees in the ‘Stadioneiland’, dropped. This phenomenon counteracts the cooling function of urban trees when it is most needed. The hypothesis is that the unsaturated zone dried out too much and the groundwater level dropped too low to provide water for transpiration. Under extreme heat and drought stress, trees might indeed defoliate. As such, the question arises how large the water uptake of urban trees is, and how it affects the groundwater table and local water management. When taking into account the more extreme weather predictions due to climate change, it becomes clear that water management will play an important role in the functioning of adaptation measures such as urban trees.

Moreover, a low groundwater level is not only a threat for trees, but also for the numerous wooden foundations of buildings in urban areas such as the ‘Stadioneiland’. When they are not saturated with water, bacterial wood decay might lead to construction instability. Therefore Waternet monitors and models the groundwater level as precise as possible. To avoid the above described issues, it is possible to try to raise the level in summer. However, with the natural rise of groundwater in winter new problems arise, such as root decay. It goes without saying that urban water and green management have numerous challenges ahead.

With this research, the Laboratory for Plant Ecology aims at quantifying the transpiration of trees in the ‘Stadioneiland’. By monitoring urban trees, we collect and analyse live data of sap flow and growth. Over five master students in Bioscience Engineering at Ghent University have contributed to this project and a PhD research funded by the Flemish Research Foundation FWO is currently focussing on improving the accuracy of tree transpiration measurements for urban applications. Transpiration data measured by the Laboratory of Plant Ecology is being implemented in a groundwater model of Waternet. The modelling outcomes have a two-sided purpose. On the one hand, they give insight in water management. On the other hand, results might lead to important recommendations regarding tree and water management for climate adaptation. Through the collaboration of the Laboratory of Plant Ecology, Waternet and the City of Amsterdam, ecophysiology and hydrology knowledge are being brought together to bridge the gap between research, tree management and water management. These multidisciplinary research efforts will ultimately improve our understanding of the urban water balance in green cities.

Since May 2019, six elm trees (five Ulmus minor ‘Sarniensis’ and one Ulmus ‘Columella’), the most abundant species in the 'Stadioneiland', are being monitored with sap flow sensors and dendrometers. In the summer of 2021, sensors in six additional Ulmus minor ‘Sarniensis’ trees have been installed to gain insight in the variability of measurements linked to tree size. In the following winter, these were moved to Linden trees (Tilia europaea ‘Pallida’) to collect sap flow data from the second most abundant tree species in the study area.

The dynamic charts below display sap flow and diameter variation measurements in real time. Using the 'zoom' buttons it is possible to select a different time range. A specific time range can also be defined. Furthermore data ranges can be selected by simple clicking and dragging your cursor along the chart horizontally.